A ‘modern classic’, purchased by Offshore Yacht Charter in August 2008 and renamed to ‘Cherokee’. The Cherokee was built in 2000 and designed by J & J Design. In 2009 the ship has been refitted for sailing at sea with passengers and it now has a cutter rig and a generator room. Cherokee, now a fast and convenient “One Off”, is 16 meters long and has a beautiful teak deck with a spacious cockpit. With her pale blue hull, the Cherokee is a real eye-catcher in every harbour and her interior is cosy and classic.

The Cherokee is very practical and therefore easy to sail. She can take a total of eight passengers plus two crew members (skipper and a bosun/cook). On longer voyages an extra crew member sails with us, and the maximum number of passengers will be 4.

The interior of s.y. Cherokee

The interior is stylish and practical paneled with mahogany. The saloon has a cozy seating area and the galley has been equipped with a refrigerator, freezer, electric heating plate and a combination of microwave and oven. In each cabin are lockers for luggage and hatches which can be opened. All cabins have a natural ventilation system and the toilets have a mechanical ventilation system. The boiler has been extended to 90 liters and the cooling water of the generator runs through it, so there is also plenty of hot water to shower on the anchorages.

The cockpit has a lot of space with comfortable couches and a table. If it might cool down, or start raining in the evening, we can put up a cockpit tent in no time, so that you can still sit outside (sheltered).

Technical details of the yacht Cherokee

The Cherokee is a solidly built ship and equipped with all necessary safety and navigation equipment to be able to sail at sea. During the refit, a lot of effort has been spent on the subdivision and fire safety. The skipper will give an explanation about the ship and the safety procedures at the start of each sailing trip.

To ensure fire safety on board smoking is not allowed inside the ship. For your own safety and that of other persons on board, drinking alcohol is also not allowed while sailing.

– AIS-B Transponder (Automatic Identification System, receiver and transmitter of the ship’s name, course and other details to surrounding vessels)

–AIS-plotter, gives the information of other ships, such as course, speed and closest point of appraoch

– The galley is fully electric, therefore there is no gas sor open fire.

– The engine and generator room are panelled with fire resistant material. The ventilation openings and the fuel supply can be closed from the outside. The extinguishing system in both areas is automatic but can also be operated manually.

– Apart from a fire blanket and two SOLAS approved fire extinguishers, there is also a 15 meter fire hose connected to the sea water pump.

– The entrance of the yacht can simply be closed off with two watertight doors.

– The Forepeak is a watertight compartment, the collision bulkhead can be locked inside the ship by a watertight door.

– In the ship are two bilge pumps and two bilge alarms, so that in case of damage the water ingres can be pumped out. As a backup system, there is a mobile bilge pump with 15 meters of hose, which can be used anywhere in the ship.

– Markus LIFENET, can be used to lift out a drowning person rapidly and horizontally.

– Immersion suit, survival suit for the crew to guide a drowning person into the LIFENET.

– 10 Person liferaft with insulated double bottom (with SOLAS certification and SOLAS A package). The hydrostatic release automatically inflates and deploys the raft, if the ship might sink.

– EPIRB (Emergency Position Indicating Beacon) (with SOLAS approval), which can sent a distress signal via satellite to the Coast Guard with the position and ship’s name. Due to the hydrostatic release, the EPIRB will be activated and deployed automatically, if the ship might sink. 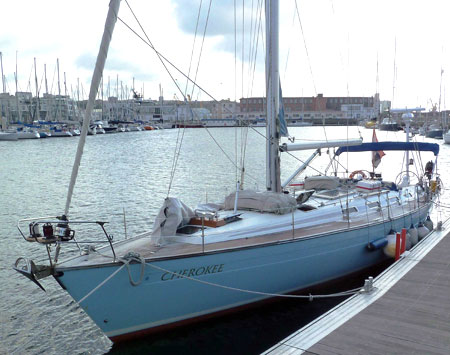 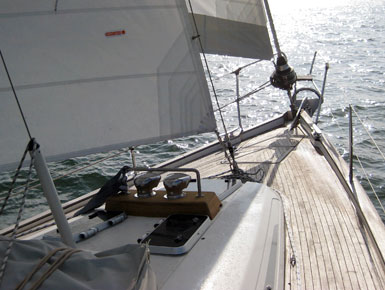